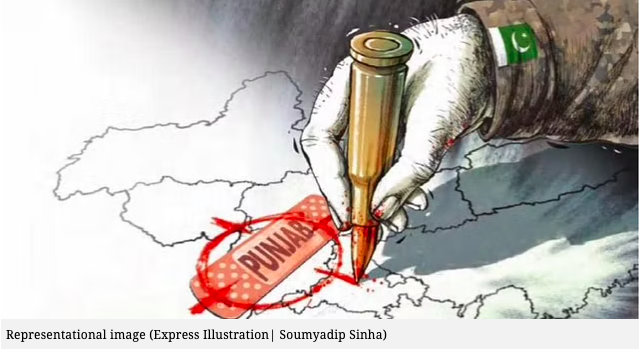 Proxy hybrid conflict is a part of Pakistan's overall warfighting doctrine. From the time it was involved in Afghanistan against the Soviet invasion in the 80s, as also in the Indian state of Punjab in the same decade, Pakistan has experimented with different modes of hybridity in low-intensity conflict. The same extended into Jammu & Kashmir (J&K) in 1989-90, when Pakistan perceived an opportunity that could be exploited. In order to do that, Pakistan's deep state, which handles its security- and finance-related policy, progressively pulled out from the activities it was sponsoring in Punjab to focus on the new front in J&K. Probably handling both Punjab and J&K through proxy elements was beyond Pakistan's capability, especially since Afghanistan too had not fully stabilised and civil war was still rife. For the next 30 years, Pakistan pursued proxy hybrid conflict in J&K, first in the entire state and then primarily within Kashmir. The policy of pursuing a doctrine of imposing a thousand cuts on India by exploiting its multiple fault lines could continue but only up to a point. In recent years, India successfully contained Pakistan's nuisance capability through a policy of credible response to acts clearly crossing the limits of New Delhi's tolerance. It also reduced Pakistan's infiltration and hinterland interference through continuous counter-infiltration and counter-terror operations. After the 5 August 2019 constitutional decision and the effective crackdown on terrorist capability, Pakistan has been on the back foot, but the steadily improving situation and emerging stability is not something it wishes to see perpetuated. Clearly hamstrung for options, two factors have come to its rescue. First is the Chinese coercion of India in Ladakh and second the sudden turnaround in the situation in Afghanistan.

China's entry into the South Asian security environment by attempts to coerce India at the borders is clearly with the purpose of denting Indian strategic confidence that has been on the rise under Prime Minister Narendra Modi. For Pakistan, this is a virtual gift from China; a perceived guarantee that under Chinese threat India will no longer be able to respond to acts of crossing the rubicon by Pakistan. With the situation in Afghanistan also apparently shifting to Pakistan's favour and the deep state providing guidance to China in the handling of the latter's multiple interests, there appears a perception that the overall situation in South Asia is also beneficial to Islamabad. As such, Pakistan feels confident in taking greater risk to re-engage with India in proxy hybrid conflict that can spread beyond J&K, something it was earlier reluctant to do, with the natural expansion area being the Indian state of Punjab. The advantages of choosing Punjab are manifold. There exists the earlier experience of over 10 years (1980–92) of cultivating unrest there. Thereafter too, many of the networks have continued clandestinely, perhaps with the existence of some sleeper agents. To keep the state away from normalcy, deliberate efforts to spread the narcotics conduits and force Punjab's youth into the ways of life under drugs have been ardently made. The help of criminal networks, foreign funds and Canada- and UK-based Sikh separatists has been garnered for all these nefarious activities. In recent times, efforts to build caches of contraband weapons and explosives have been going on in the border areas with the help of trans-border flights of drones.

With the change in the geopolitical situation involving the Sino-Indian standoff, the events in Afghanistan and the apparent lack of interest by the US in affairs of South Asia, Pakistan has obviously sensed an opportunity, although a risky one. What are the ingredients that an adversary seeks to exploit and bring about instability and general chaos in the region it eyes? First and foremost is political uncertainty, so that decisions cannot be taken in time and no firm commitment towards ensuring security is displayed by the government. Second is the availability of resources both human and material, so that they can spread out and trigger chaos by blasts, shootings or kidnappings. Third is the effort to create divisiveness in society through rumours or acts of desecration, statements in the media and in public meetings. Fourth is the creation of networks - financial, media, narcotics and criminal - such that all activities can cease for some duration when the conditions are not conducive for terror activity and then revive at short notice. If one looks at the Punjab of today, a state about to go to elections, many of these ingredients are present. For Pakistan, low-level simmering activity in Kashmir, the spread of communal divisiveness and terror acts in Jammu and the creation of any form of instability in Punjab is a situation tailor-made for the promotion of its interests. It can attempt to keep one region highly active at a time and the others in low-key mode ready to be ignited when needed.

Has India provided Pakistan the opportunities that the latter seeks? This is not true yet but Punjab in pre-election mode is veering towards that. Perhaps J&K and Punjab need to be seen as a seamless continuum. The region's police forces have done some excellent work in the past and that is what India should be relying upon for the future. Our intelligence services have gained tremendous experience in the last 20 years or so. The Army is available as backup and there is the institutional memory that the last time it was the people of Punjab who defeated separatism and all nefarious Pakistani designs. The only thing we need to be wary of is the politics of the states. J&K is under President's Rule and we do not know what the future holds after delimitation. As far as Punjab is concerned, it is unpredictable too. The state of politics being unstable is one factor that militates against the entire frontage. This is a time when political consensus is needed for the sake of security. This is very unlikely but a conscious effort to overcome the likely instability that may prevail here for some time must be sought. At the same time, taking the battle to the adversary must become the mantra. Defensive mode in this context would obviously not work to our advantage. We cannot afford to wait and let Pakistan do what it wishes to do. The battle has to be taken to the other side; soonest.