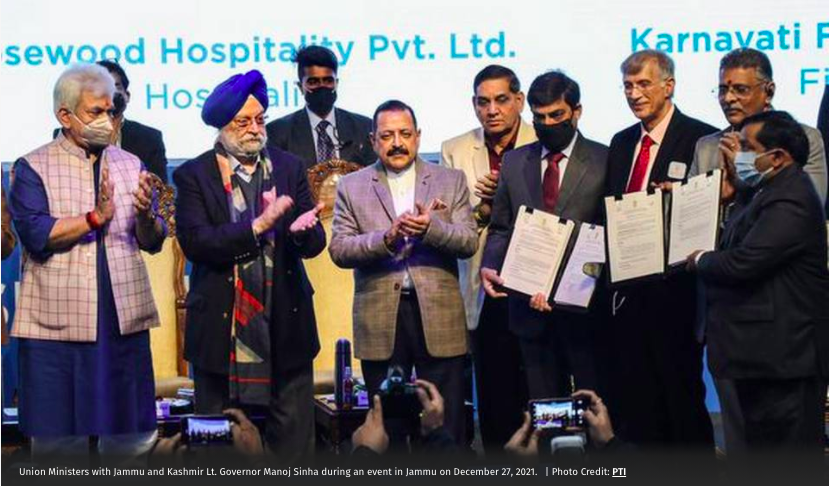 JAMMU: Jammu and Kashmir’s first ever Real Estate Summit turned historic as the Union Territory was opened to the country’s real estate investors with the signing of 39 MoUs worth nearly Rs 19,000 crore for the development of housing, hotel and commercial projects. This is being seen as a major push to attract investments from real estate bigwigs.

Lieutenant Governor Manoj Sinha termed the signing of the MoUs at J&K’s first Real Estate Summit as “historic” and said it is a major step towards UT’s transformation, media reports said. He said the government had already implemented the realty law RERA and adopted Model Tenancy Act in the UT.

Sinha has assured realtors that the government would reduce stamp duty on registration of properties in line with other states and set up a single-window system for faster approval of projects, PTI reported.

“The NAREDCO will train 10,000 workers in various skills of the construction industry, electrical, plumbing, masonry, carpentry and the likes,” the Lieutenant Governor said.

Sinha said these pacts would help generate employment opportunities and also boost the economy of the UT. The L-G also said the investors have been asked to partner with local builders of the UT so that local people get share of the development process.

The official summit document said Jammu and Kashmir has become a promising yet untapped destination for the next wave of growth and prosperity, The Hindu report said. “Under the newly introduced Jammu and Kashmir Development Act, the term ‘being permanent resident of the State’ as a criterion has been ‘omitted’, paving the way for investors outside Jammu and Kashmir to invest in the Union Territory. As a result, any citizen of India can buy non-agriculture land in Jammu and Kashmir,” read the document.

Jammu and Kashmir Lieutenant Governor Manoj Sinha, speaking during the summit, said, “To facilitate transparent and accountable framework in the real estate sector, we have launched many portals — RERA portal, housing portal, integrated auction portal. Such initiatives will help both developers and home buyers as one-stop portal for all their needs.”

Sinha said there were people who did not want Jammu and Kashmir to develop at par with other parts of India. “They want industries without giving land for it and development without investments. But we will break all walls that will come in the way of Jammu and Kashmir,” the Lieutenant Governor said.

Union Minister for Housing and Urban Affairs Hardeep Singh Puri said a large-scale infrastructure development, denied to the people of Jammu and Kashmir earlier, was now possible. “By combining rich natural resources with external investment and technical expertise, the citizens of Jammu and Kashmir will now have access to a higher quality of life.”

Srinagar will also host a ‘Real Estate Summit’ on May 23 in 2022. As per the government estimates, the projected indigenous housing demand in Jammu and Kashmir is 2.5 lakh dwelling units, out of which 30% is in urban areas.

Dr Jitendra Singh later tweeted: "PM @narendramodi seeks to make #JammuAndKashmir an essential part of New India's Growth story. The challenge is to liberate ourselves from the conditioning of the status-quoist mindset and build capacities to meet global benchmarks in a global India": J&K Real Estate Summit.