HISTORIC: ARTICLES 370, 35A FINISHED IN ONE STROKE! 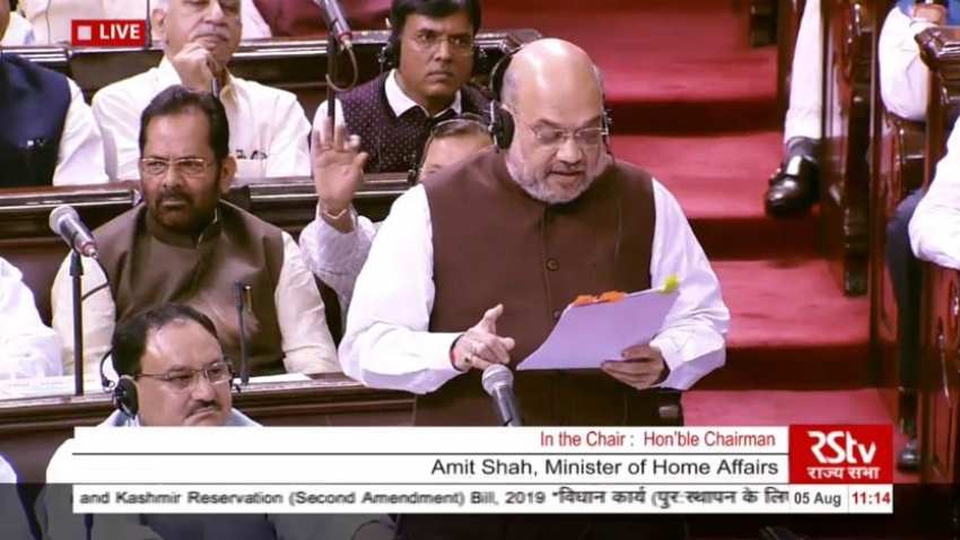 Since 2 August 2019, events had been moving fast in the (erstwhile) state of Jammu and Kashmir. Troops were being moved in, Amarnath Yatra was suspended and tourists asked to leave the valley as soon as possible. On 4 August, Section 144 was implemented and valley-based leaders in Srinagar were placed in preventive custody. Reports of Rajya Sabha zero hour being postponed in view of legislative action to be bought in by the Home Minister set off speculations about the impeding removal of Article 370 or Article 35A .

The resolution was for the amendment to Article 370, which set off an unbelieving cheer through out the nation. A constitutional injustice, which inspite of resistance from Ambedkar and other stalwarts was pushed through as Draft 304A, which became Article 370. The second resolution was regarding reorganisation of the state of Jammu and Kashmir into two union territories, one Ladakh, and the other Jammu and Kashmir.

In front of an unbelieving nation, fed on the fake narrative that Article 370 was the condition of accession of the State of Jammu Kashmir and was inviolable, the article was amended and the state ceased to exist as a state, reorganised into two union territories.

The Article 370 has bbeen amended by ‘The Constitution (application to Jammu and Kashmir) order 2019'. 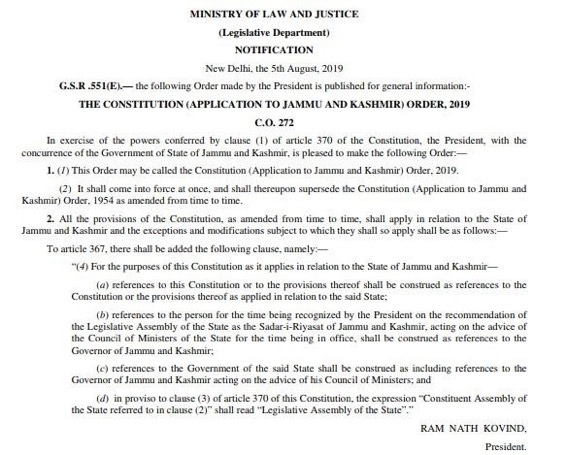 The greatest relief will be the automatic revocation of Article 35A which gave permanent resident status to a certain class of citizens, while excluding the non PRC holders from government schemes, jobs, voting rights etc.

The West Pakistan refugees, living in Jammu region with no PRC, which caused their exclusion from all state government schemes, voting in state elections, owning property, getting seats in state’s higher education institutes etc. have suddenly been released from these hardships. Now they are at par with all citizens of India with all rights in the union territory of Jammu and Kashmir .

The Valmikis of Jammu who were given limited PRC and could only get sweeper jobs are now equal to other residents of Jammu Kashmir, with equal rights .

All Bills passed by Parliament will be automatically applied to the Union Territory of JK, the 72 yr old disclaimer at end of bills stating that it ‘applies to all states and UTs except the State of Jammu Kashmir’ is history now.

IMPACT OF BIFURCATION OF J&K STATE INTO TWO UNION TERRITORIES

There have often been demands to trifurcate Jammu and Kashmir state into three states: Jammu, Kashmir and Ladakh. This demand was often made by suffering residents of Jammu and Ladakh, facing hardships due to Article 370 and 35A, and the Kashmir valley dominance in state assembly . Trifurcation into states was opposed by many as it was felt that Pakistan would strengthen its claim on Muslim Majority Kashmir valley, and Article 370, Article 35A would continue to give sweeping powers to the state government. Also the future status of the occupied territories would be in question.

However, by bifurcation of the state into two union territories, the problem of valley dominance, Pakistani claims, status of occupied territories has been resolved.

Granting of union territory status and separation from Jammu and Kashmir has been a long standing demand of the people of Ladakh. Ladakh has the largest territory in the erstwhile state of Jammu Kashmir, with its borders touching China and Pakistan . The 1999 Kargil war had been fought in Ladakh. The residents of Kargil and Ladakh have never participated in bandh calls given by the valley based separatists.

Post Independence, Ladakh wanted to be delinked from Kashmir and become a part of India as it feared JK acceding to Pakistan.

In 1949, a delegation of the Young Men’s Buddhist Association of Ladakh led by Kalon Chhewang Rigzin met Nehru in Delhi and presented him a memorandum: “We seek the bosom of that gracious Mother India to receive more nutriment for growth to our full stature in every way. She has given us what we prize above all things — our religion and culture.”

The Ladakhis were delighted to see the Ashoka chakra on the Indian flag; it was the Buddhist symbol of "goodwill for all humanity and India’s concern for her children". Unfortunately, Indian leaders did not respond to Ladakh’s appeal.

On 29 April 1952 Kushak Bakula wrote to PM Nehru regarding the desire of Ladakh to associate closely with India.

Here is Nehru’s answer (via his PS OP Mathai):

Prime Minister, Jawaharlal Nehru, has received your letter of April 29th. You have based that letter on certain statements made by Shaikh Mohammad Abdullah and others. As a matter of fact, the reporting of that statement was incorrect and has been subsequently rectified.

The Prime Minister appreciates your desire to have close relations with India. Indeed those relations not only of Ladakh but of the whole of the Kashmir State will no doubt become closer in many ways.

Your particular demand for Ladakh to associate itself more closely with India is not feasible for a variety of reasons among them being the fact that the whole question of Kashmir is before the United Nations.

Prime Minister asked me to inform you that there is no reason for any apprehension on your part in regard to Ladakh or Kashmir as a whole.

The people of Ladakh had faced aggressive invasions by Pakistani Army in 1947, the Pakistani Army was invited by Muslim residents of Padam area (Zanskar) which was Buddhist dominated. Brave Ladakhis helped the Indian Army rout the Pakistani Army, but there was widespread looting of monasteries, homes and killing and rapes of Buddhists. The relief money sent by the Centre on being informed about the damages never reached the people of Ladakh. The distrust kept on growing between the valley and Ladakh. It took Ladakh nearly 70 years to get a divisional status. Now as Union Territory, to be administered directly by the Centre, the aspirations of Ladakh can be looked into. The security situation, especially the frequent incursions by Chinese army, construction of roads to the border, and the vexed question of Aksai Chin can be dealt with by the Centre .

IMPACT OF JAMMU-KASHMIR AS UNION TERRITORY

The impact of this amendment is far reaching. With revoking of Article 370, all citizens are equal in JK. The stranglehold of subregional parties is over by this move. A delimitation exercise will correct the unjustified dominance of valley in state legislature. All funding will be controlled by the Centre. The JK police will be under the Union Home Ministry. The corruption cases against the valley politicians will continue unabated. The stranglehold of the valley on media will be broken. Tourism will get a fillip. Numerous temples and places of religious significance in the valley can be maintained and be brought into mainstream.

The union territory legislature will also have SC/ST reservation of 33%, which will again reduce valley-centric parties’ dominance. New power axis will emerge. The injustice meted out to Praja Parishad has been rectified 70 years after it was forced into political oblivion by rejection of its nominations.

The state assembly has been replaced by Parliament in the resolution to amend article 370. By converting the state into Union Territory, Amit Shah has pre-empted any future plan by a state assembly to revoke the revocation of Article 370.

The Modi Government has bitten the bullet and revoked Article 370, and has reorganised the state into two union territories. As expected Pakistan, through its foreign minister, opposed this development and positioned itself as a party to Jammu and Kashmir .

If Pakistan passes a resolution on this issue, it opens the door for a resolution on the occupied territories by India again. Also india can cite revocation of state subject rule in 1974 in Gilgit Baltistan and attempts to make it a fifth province.

In case Pakistan decides to recognise Kashmir as an independent nation, then again it gives India ammunition to bring out the issue of occupied territories into international spotlight. Also, Baluchistan, Pashtunistan issue can be internationalised by India.

Amnesty International has issued a statement against the development in an expected tone. It tweeted: ‘The unilateral decision by Government of India to revoke Jammu & Kashmir's special status without consulting J&K stakeholders, amidst a clampdown on civil liberties & communications blackout is likely to increase the risk of further human rights violations & inflame tensions.’

5 August has been a historical day. Constitutional frauds and unjust legislations that caused manifold miseries to residents of Jammu and Kashmir for decades have been addressed by Parliament. The resolutions and bills are legally sound and loopholes have been anticipated and addressed. The development today has been meticulously planned with a long term vision.

The Narendra Modi Government has utilised the massive mandate it was given in Lok Sabha 2019. With a steely resolve, aided by a deep understanding of the issues involved, long term visionary legislations have been bought in.

The decision are a befitting tribute to Pandit Prem Nath Dogra, who against all odds, isolated on national front, gave the slogan ‘Ek Desh Mein Do Nishan, Do Samvidhan nahi chalengey’ . This was supported by Shyama Prasad Mukherjee who made it a national movement. Today, the martyrdom of Sri Mukherjee has been avenged with the integration of Jammu and Kashmir with India completely.