All eyes now on September 7 when Chandrayaan 2 will soft land in the south polar region of the moon.

NEW DELHI: Prime Minister Narendra Modi congratulated Team ISRO in a tweet today following Chandrayaan 2 entering the Moon’s orbit after 28 days of space travel. He said it is an important step in the landmark journey to the Moon and gave his best wishes for the lunar mission’s successful culmination.

Congratulatory wishes have been pouring in on the social media for the Indian Space Research Organisation (ISRO) ever since the news of successfully placing Chandrayaan-2 into lunar orbit came in this morning. ISRO chairman K Sivan said that the mission had crossed a ‘major milestone’ on Tuesday.

Talking to mediapersons, Sivan said the precise lunar orbit insertion manoeuvre was carried out at 9 am for about 30 minutes and Chandrayaan-2 was precisely inserted in the defined orbit.

The 3,850-kg, Rs 978-crore spacecraft is a three-module composite made up of an orbiter, lander, and rover. On its planned 48-day journey between lift-off and landing on the Moon's South Pole, the composite is being subjected to a series of orbital manoeuvres to bring it to the moon's vicinity.

The objective of Chandrayaan-2 is to develop and demonstrate the key technologies for end-to-end lunar mission capability, including soft-landing and roving on the lunar surface.

Chandrayaan-2 mission will help expand India's footprint in space, inspire a future generation of scientists, engineers, and explorers. It also aims to further expand the knowledge about the moon through a detailed study of its topography, mineralogy, surface chemical composition, thermo-physical characteristics and atmosphere, leading to a better understanding of the origin and evolution of the moon, the space agency said in its report.

The landing site in the South polar region is somewhere no mission has previously been. “The world is eager to know what the mission will find here," said the ISRO chairman. The water and mineral deposits in the region are particularly interesting, he added.

Dr Sivan had mentioned earlier that “There will be 15 terrifying minutes for scientists once the lander is released and is hurled towards the South Pole of the Moon”.

The Lander is wrapped in a golden coloured multi-layer insulation polymer to protect its sensitive electronics as their operational parameters are highly sensitive to environmental conditions. The Lander is also fitted with solar panels for energy generation for sustenance on the Lunar surface. Lunar dust is expected to rise around the Lander during this touchdown but due to the absence of any significant atmosphere, dust particles only below the rocket exhaust shall be disturbed.

On August 4, ISRO released the first set of pictures of the earth captured by L 14 camera onboard Chandrayaan 2. The pictures show the Earth in different hues.

“Next major event would happen on September 2 when the lander would be separated from the orbiter. On September 3, we would have a small manoeuvre for about 3 seconds to ensure that the systems of the lander are running normally,” he added.

Sivan also informed that lander would finally land on the moon on September 7 at 1:55 am.

Today Lunar Orbit Insertion (LOI) manoeuvre was completed successfully at 09:02 am as planned, using the onboard propulsion system, ISRO said in a statement.

This was a tricky operation in the mission because if the satellite approached the Moon at a higher-than-expected velocity it would have bounced off into deep space.

Chandrayaan-2, launched on July 22 by GSLV MkIII-M1 vehicle from the spaceport of Sriharikota in Andhra Pradesh had entered the Lunar Transfer Trajectory on August 14 after final orbit raising manoeuvre of the spacecraft was successfully carried out.

The lift-off was successful in its second attempt, a week after it was aborted shortly from its launch due to a technical glitch. Prior to this, the Indian Space Research Organisation had launched Chandrayaan-1, India's first lunar probe in October 2008, which was in operation until August 2009.

If accomplished successfully, Chandrayaan-2, country’s second lunar mission will make India the fourth country to soft land a rover on the lunar surface after Russia, United States and China. The last nation to attempt a soft landing on the Moon – Israel failed in its attempt earlier this year.

After successful insertion, ISRO would carry out four more orbit manoeuvres (August 21, 28, 30 and September 1) to enter it into its final orbit.

Subsequently, the Vikram lander would separate from the orbiter on September 2, 2019.

Two orbit manoeuvres would be performed on the lander before the initiation of powered descent to make a soft landing on the lunar surface on September 7, 2019, ISRO said

Why this lunar mission is important:

1. The elemental and positional advantages of the lunar surface make it a suitable stop for future space exploration. In a press briefing earlier, Dr K Sivan, ISRO’s chairman had announced the agency's ambitions to have a space station in orbit, as a way to sustain the capabilities and the capacity being built in the country by the Gaganyaan mission - the indigenous human spaceflight programme.

2. Moon's craters have been untouched by sunlight for billions of years - offering an undisturbed record of the solar system's origins.

3. Its permanently shadowed craters are estimated to hold nearly 100 million tons of water.

4. Its surface has traces of hydrogen, ammonia, methane, sodium, mercury and silver - making it an untapped source of essential resources.

The health of the spacecraft is being continuously monitored from the Mission Operations Complex (MOX) at ISRO Telemetry, Tracking and Command Network (ISTRAC) in Bengaluru with support from Indian Deep Space Network (IDSN) antennas at Byalalu, near Bengaluru.

From ferrying foreign satellites, launching moon and Mars orbiters, and now planning to land on the Moon, Indian space odyssey has come a long way to.

It started with launching an Apple satellite in 1981 and went on to achievements like launching PSLV, GSLV, Cryo engines, MOM, Moon & now a moon lander. 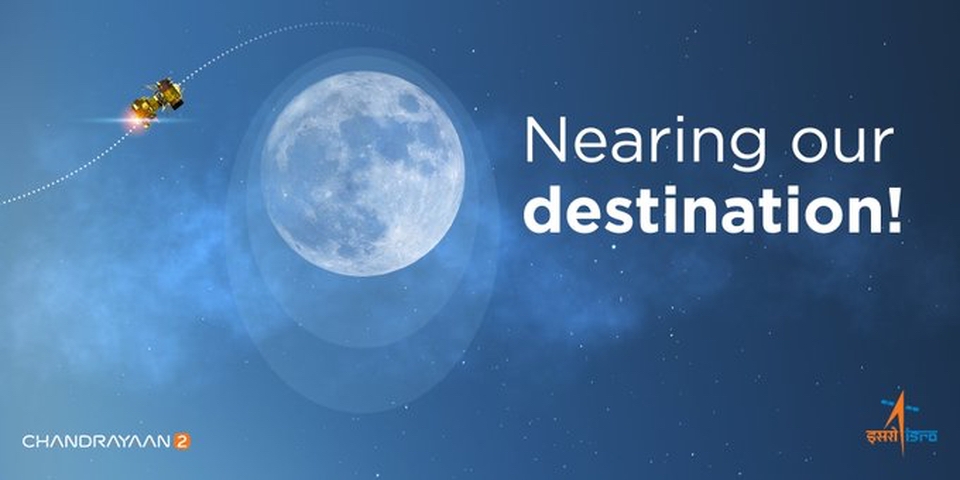