In New Kashmir, political parties may be forced to ditch separatism 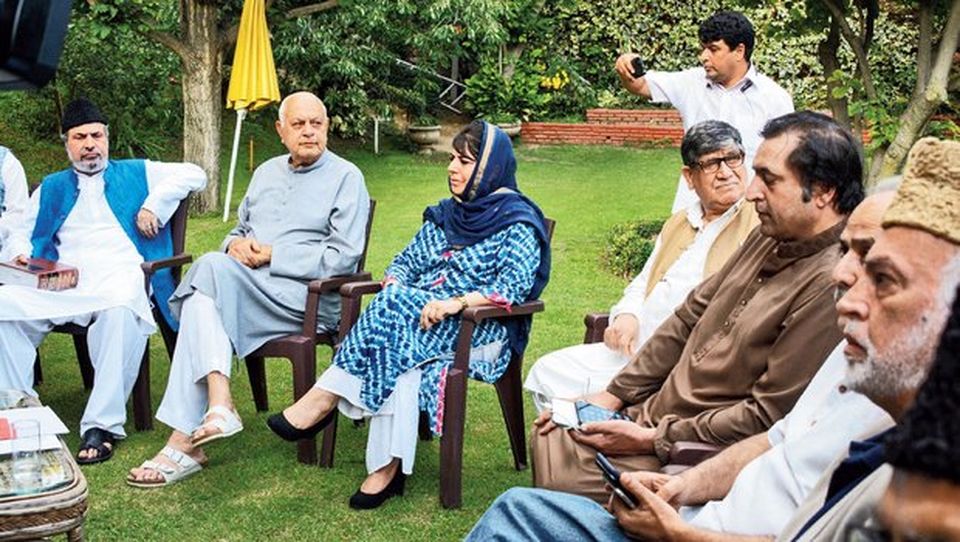 Source: The Times of India

SRINAGAR/NEW DELHI: After abrogation of the special status conferred to Jammu & Kashmir by the Constitution, politics in the Valley is set to witness an “unprecedented recalibration" now. While some separatists are mulling over joining mainstream politics, some in the mainstream are on the verge of defecting to rival parties.

Insiders in both separatist and mainstream camps in Srinagar told TOI that after absorbing the initial shock of bifurcation of the state of Jammu & Kashmir into two Union territories and invalidation of Articles 370 and 35A which granted J&K extraordinary privileges, all groups have begun discussions on the future of their politics.

In the last 30 years of violent insurgency and terrorism, while separatists refused to accept the legitimacy of the Indian Constitution and sought secession from India. Kashmir's grand old party National Conference demanded restoration of the pre-1953 autonomy J&K enjoyed. The other major political party in the mainstream fold, People's Democratic Party IPDP) pursued soft-separatism with religious symbolism. Smaller Kashmir-centric parties followed similar line of politics even as they aligned with national parties at one point or the other for government formation.

Now that New Delhi removed all ambiguity about J&K's relationship with the rest of India, everything has changed. We are now like the rest of the country, instead of a special state whose future was uncertain between India and Pakistan. The matter has been settled and from here on political parties will have to contest on governance issues rather than separatism, soft-separatism and autonomy — which were shades of the same underlying conflict since 1947. The political agenda of all the regional parties in Kashmir stands irrelevant today." Mudassir, a young political activist aspiring to enter regional politics told TOI in Srinagar.

According to insiders in the Hurriyat, the conglomerate of separatist and Islamist groups, the younger generation among them is keen to join the mainstream. 'There is a realization that separatism, which sustained on funding from both Pakistan and India, hasn't helped Kashmiri society. The bloodshed hurt Kashmiris the most while the top leadership among separatists and their children lived a lavish life. The second and third-rung separatists would rather be part of the democratic system in Kashmir today," a separatist who did not want to be named said in Hazratbal area.

Sources in NC said party president Farooq Abdullah is ready to fight for the restoration of statehood of J&K, which is now a Union territory, but son Omar is reluctant as of now. lt is a bit difficult for the Abdullahs to reconcile with the new reality. Won't be easy for them to accept erosion of the political power they yielded in the large state of J&K. But after the bifurcation and conversion to Union Territory, Kashmir's exorbitant power over all other regions, stands eroded. So electorally, especially after delimitation of constituencies, the power of Kashmir-centric political parties will diminish. It hurts Abdullahs especially because they have had a long legacy and history in Kashmir. Why would they or anybody for that matter, agree to a diluted version of chief ministership?" an NC worker said.

With the leadership of the pro-Pakistan banned organization Jamat-e-lslami behind bars, PDP chief Mehbooba Multi is also assessing her options. A politician who worked closely with the Muftis told TOI, “Jamaat votes were fundamental to PDP's rise to power in Kashmir. But after the crackdown on separatists and Jamaat, PDP is finished. As of today, it seems, the party will break into several factions. Mehbooba had already alienated senior leaders by handing over the reins of the party to her family members during her coalition government with the BJP. Also, very few in the party want to continue with her rabid anti-India politics now. Everyone knows that the old political game is over," he said.

Close friends of Shah Faesal, who quit civil services last year and set up a new political party on the lines of Arvind Kejriwal's Aam Aadmi Party, told TOI that he might benefit from the uncertainty and political baggage that the Abdullahs and Muftis carry. He has served as an Indian bureaucrat in Kashmir and he has been promising to deliver something new. He is a clean slate that way, even as he has been sending out contrarian and confusing messages on social media. But then he has massive youth fan following." a friend who works in tourism industry said.

BJP sources said it might accommodate People's Conference headed by Sajad Lone, the only political party that openly backed the Modi government, if they arrive at "some agreement°.

But the most important kingmaker in Kashmir politics, party sources said, would be the members of the recently-elected panchayats and local bodies. "A lot of young, bright and progressive Kashmiris who contested elections when everyone else boycotted will be a formidable force soon," Mir Junaid told TOI.

Junaid (27), a socio-political activist from Langate, north Kashmir, has been at the forefront of engaging youth of Kashmir for last several years. He was instrumental in galvanising candidates for panchayat and local body elections held recently. Out of his 2774 candidates, 2368 won including 712 women in panchayat elections and out of 245 candidates, 135 won in municipal pots.