J&K and Maharaja Hari Singh: The Pressures and Pulls of Geo-Politics

1947: Western powers were playing the Great Game of Jammu & Kashmir. Who were the willing actors on Indian side? 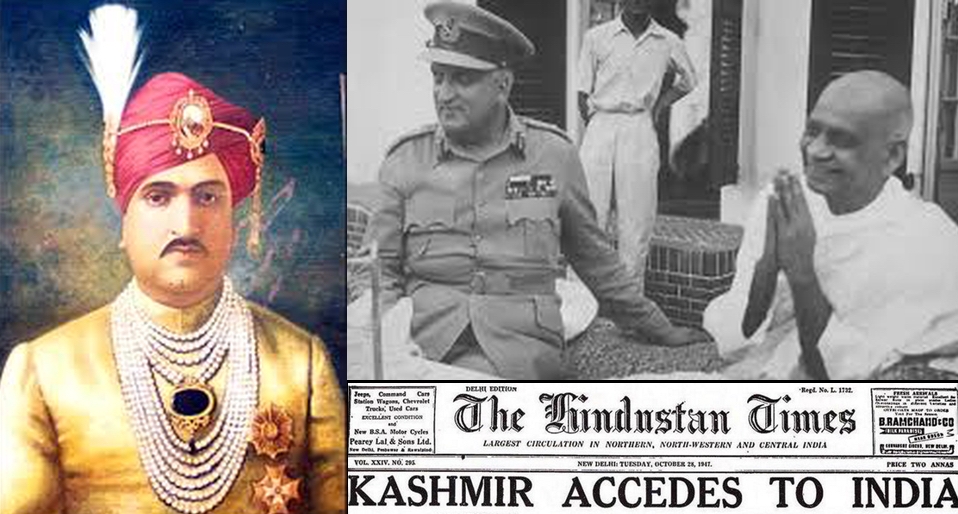 Geo-politics as a tool of neo-colonial restructuring of geographies is most evident in the bloodbath that plagued undivided India and then after partition in this region even up to the independence of Bangladesh in 1971. The effects of geo-politics are being felt to date in Kashmir. The year 1947 was significant for India not only in terms of a partition that was emerging on the political horizon but also because the shadow of the great colonial game was hanging long over the subcontinent. Both Maharaja Hari Singh and his State of Jammu and Kashmir were caught in the web of geo-politics that ensued.

The Second World War had ended in 1945 with the USSR emerging as the second pole in a bi-polar world. The sun was finally setting over the European centuries and the unchallenged supremacy of the British Colonial Empire. UK and USA were defining their strategies in a ‘De-colonising’ world. George F. Kennan, a career Foreign Service Officer, in the USA formulated the policy of “containment,” the basic United States strategy for fighting the cold war (1947–1989) with the Soviet Union.

Kennan’s ideas, which became the basis of the Truman administration’s foreign policy, first came to public attention in 1947 in the form of an anonymous contribution to the journal Foreign Affairs, the so-called “X-Article.” “The main element of any United States policy toward the Soviet Union,” Kennan wrote, “must be that of a long-term, patient but firm and vigilant containment of Russian expansive tendencies”. In UK the concerns regarding the geo-political implications of Indian Independence were equally clear. When Mountbatten came to India, his objectives were spelled out to him. He had to secure the North- western borders of India from the danger of Soviet expansion across Central Asian republics and Afghanistan.

Both Britain and America extracted advantages from the Great game in India. The Congress Party's insistence on its leading role drove the Muslims and Jinnah closer to the British than they might have gone; that the US was interested in India's freedom as a way to weaken Britain's postwar influence and keep the UK under American leadership; that a Nehruvian India was not seen as a trustworthy partner in the new chapter of the Great Game opening after 1945, but a separate Pakistan would be needed as an ally. The creation of Pakistan was integral to Britain's grand strategy.

If they were to ever leave India, Britain's military planners had made it clear that they needed to retain a foothold in the NWFP (North West Frontier Province) and Baluchistan, because that would provide the means to retain control of Iran (where BP's predecessor, the Anglo-Persian Oil Company, owned oil reserves), Iraq (where a British puppet monarchy enabled tight British control of the Iraqi Petroleum Co.) and the potentially oil-rich British protectorates of Kuwait, the Trucial States (now the UAE), Bahrain and Qatar.

The problem for Britain was that the NWFP had elected Congress governments in both 1937 and 1946, and the NWFP delegation had entered the Constituent Assembly of India in December 1946 (defying the Muslim League's call to boycott it).

Mountbatten was able to persuade Jawaharlal Nehru to agree to a referendum in the NWFP -- which Ghaffar Khan's Khudai Khidmatgars boycotted. Kashmir , with the strategic Gilgit –Baltistan was another region that the Western powers wanted firmly placed in Pakistan.

Kashmir was central to this scheme, and the government had forced the Maharaja of Kashmir to sign an agreement that allowed the British to have military control over the long corridor from Kashmir Valley to Afghanistan and Central Asia. This highly strategic corridor consisted of Gilgit, Baltistan (Skardu), Hunza, Nagar, Chitral, Yasin and Ponial. A Gilgit Agency was created for this area and was put under the control of the British Army. But with the independence of India this agreement lapsed.

It was therefore important that the plan of partition be prepared in a way so as to allow Pakistan to control the entire area, including Jammu and Kashmir State. The Instrument of Accession gave Indian princes the right to join either India or Pakistan. Mountbatten could not ignore the possibility of the Hindu king of Kashmir deciding to join India and creating serious difficulties. A chain of covert activities to save the plan became necessary.

The Maharaja of Kashmir, Hari Singh, had already earned the displeasure of British imperialists by demanding independence for India. In the Round Table Conference held in London in 1931, Maharaja Hari Singh made this demand as the chairman of the Chamber of Princes. He was a suspect for the British even before, since he had not allowed the British unfettered control over Gilgit, nor did he allow them to meddle in civil administration. This was specifically made clear in the Gilgit Agreement.

THE BLOCKADE OF KASHMIR

Pakistan adopted a two-pronged strategy on Kashmir. On the one hand it started to force the Maharaja of Kashmir to join Pakistan; on the other hand it started to organize the tribes of the North-West Frontier Province and Waziristan for an invasion of Kashmir. Both these programmes were to be implemented in several phases, and Jammu and Kashmir was to be besieged. This was done by blocking the Jhelum Valley Road, the only all-weather road that joined Kashmir with the rest of India The Banihal Cart Road was a hilly road which was not only unsafe but also remained closed for almost nine months during the rainy season and throughout winter. Supplies like kerosene, salt, sugar, wheat flour and other essential commodities disappeared overnight. People became panic-stricken and restless.

It was at this time Pakistan opened a second front. Major Shah, the personal secretary of Mohammad Ali Jinnah, was already in Srinagar advising the Maharaja about his legal position. Major Shah told Hari Singh that the only person who could take a decision about Kashmir accession was the Maharaja himself and that he should accede to Pakistan at the earliest. Pakistan changed track when Mehar Chand Mahajan became the Prime Minister of Kashmir - Mahajan was convinced that Maharaja Hari Singh's personal future and the future of Kashmir was with India.

ABDULLAH- NEHRU AND THE MAHARAJA

Maharaja Hari Singh had not only earned the ire of the British but he also became a pawn in the game of power being played by Nehru and Abdullah. Since about a decade before 1947, Sheikh Abdullah had emerged as a counterweight to the Maharaja in the Kashmir region (though this was merely 7% of the total land area of the entire J&K state under the Maharaja’s rule).

Mohammad Ali Jinnah had announced in Srinagar that Chaudhry Ghulam Abbas would be the leader of Kashmiri Muslims. For Sheikh Abdullah any political life meant he had to outdo the politics of Chaudhry Abbas.

Sheikh was quick to understand that his political space could only be created through an alliance with Nehru. What was the nature of the relationship between Nehru and Sheikh Abdullah? Nehru saw in Sheikh Abdullah, a Muslim face that would fill in the vacuum created by the partition. After 1947 there was no Muslim leader in the Congress. Maulana Azad was old and Rafi Ahmed Kidwai was too young. Nehru wanted Sheikh to be a leader at the national level. Sheikh’s ambitions were within Jammu and Kashmir. He believed that J&K was a state where Muslims would be dominant both demographically as well as culturally. Despite more than ample evidence it is unbelievable that Nehru did not really grasp this strategy. Sheikh Abdullah had a vice-like grip on Nehru’s trust. Nehru in turn did not bother to check Sheikh Abdullah’s manipulations.

It is clear that Maharaja Hari Singh was under great deal of pressure from various quarters and that he was susceptible to the great geo-political game being played out by colonial powers in 1947.

The utter blindness of the Nehruvian policy on Kashmir is evident in a bitter correspondence between Hari Singh and Rajendra Prasad from 1952. In this letter the Maharaja clearly outlines the Great Game in Kashmir. He outlines the ways in which Nehru and the Congress were a link in this game. In this lengthy correspondence he clearly outlines the ways in which his modern and efficiently administered State was brought to chaos, war and continuing instability.

A number of questions emerge in this context. Was the tribal invasion a part of the British-Pak strategy to control the region geo-politically? How well entrenched were American interests in this game given the Nehruvian proclivity for USSR? Did Nehru or the Maharaja know about the Kabaili raids in advance? These are questions that need to be answered through sustained research. 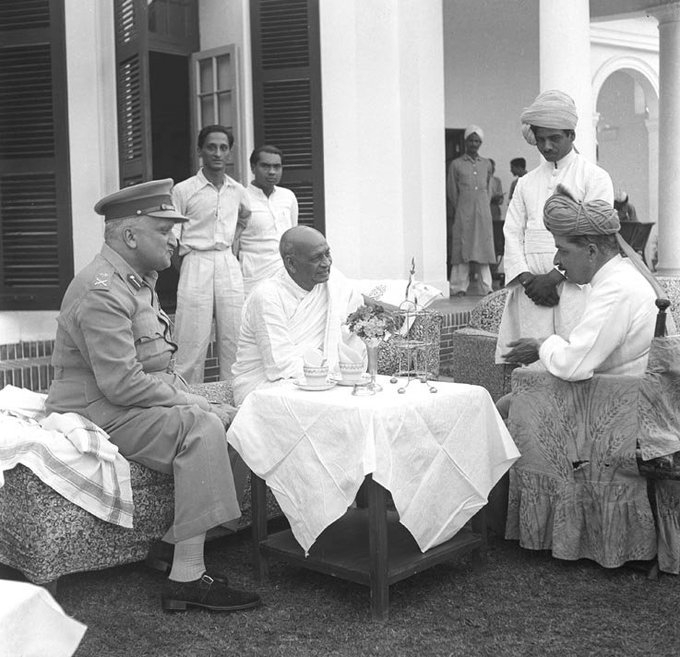