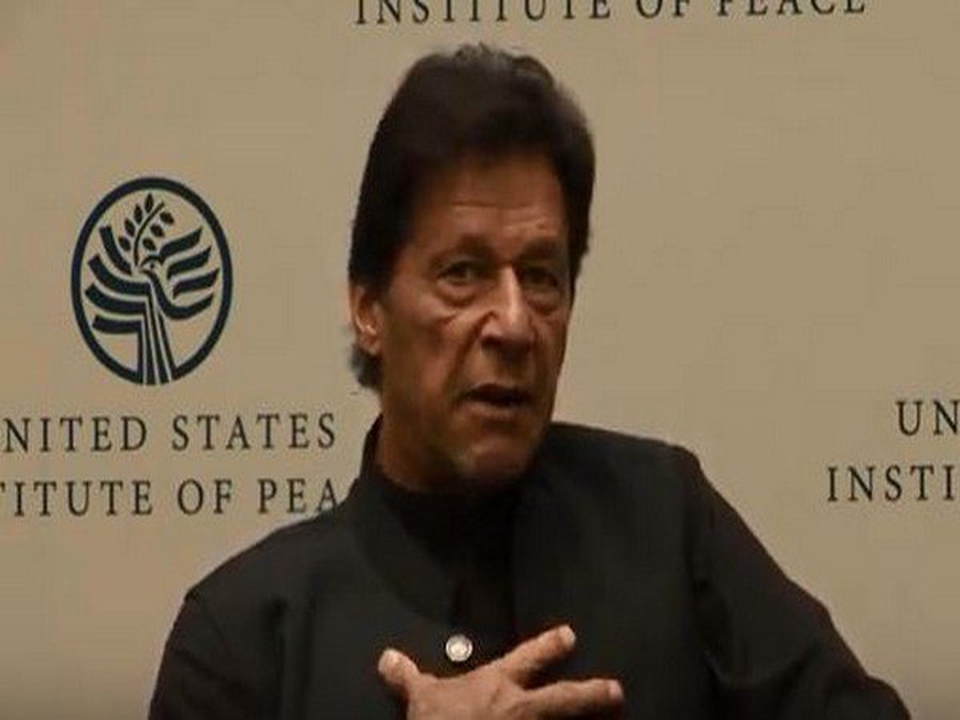 WASHINGTON: Pakistan Prime Minister Imran Khan on Tuesday made a startling revelation that his country still has about 30,000 to 40,000 terrorists 'who have been trained and fought in some part of Afghanistan or Kashmir’.

The Pakistani leader made these comments at the United States Institute of Peace during his three-day visit to the nation.

Khan also said that before his Pakistan Tehreek-e-Insaf government came into power, the governments did not have the ''political will to disarm militant groups operating on their soil.”

The Pakistan Prime Minister also acknowledged that terrorists in Pakistan carried out attacks in Jammu and Kashmir. He went on to claim that he now has the Pakistani army's support for disarming them.

Speaking at the US Institute of Peace in Washington, Khan claimed that the Pakistani army and security forces are not supporting terrorist groups, and instead backed the option of a crackdown.

During his speech, Khan went on to admit that the Pakistan-based terror group Jaish-e-Mohammed or JeM was operating against India. He went on to say that since some of the terrorists were trained and had experience of carrying out attacks in Kashmir, the Pakistan police cannot handle them, and hence the army's help is required.

Khan said: "It was said normally that the security forces patronised the (terror) groups. We would not be disarming if the security forces were not standing behind us. You cannot disarm because the police is [sic] incapable of disarming these (terror) groups. They are trained, these people have experience of fighting in Afghanistan, some in Kashmir. The police cannot go after them, so it is the army that is helping us disarm all militant groups in our country."

“There was a watershed in Pakistani politics. In 2014, the Pakistani Taliban slaughtered 150 schoolchildren at Army Public School. All the political parties signed the National Action Plan and we all decided after that, that we will not allow any militant groups to operate inside Pakistan,” Khan said.

'Until we came into power, the governments did not have the political will, because when you talk about militant groups we still have about 30,000-40,000 armed people who have been trained and fought In some part of Afghanistan or Kashmir: he revealed.

We are the first government that has started disarming militant groups. This is the first time it’s happening. We've taken over their institutes, their seminaries. We have administrators there,' he added.

During a separate event, Khan said successive governments in Pakistan did not tell the truth to the United States, in particular in the last 15 years, adding that there were 40 different terror groups operating in his country.

"We were fighting the US war on terror. Pakistan has nothing to do with 9/11. Al-Qaeda was in Afghanistan. There were no militant Taliban in Pakistan. But we joined the US war. Unfortunately, when things went wrong, where I blame my government, we did not tell the US exactly the truth on the ground," Khan said.

Part of the reason for this, Imran Khan explained to the lawmakers, was that the Pakistani governments were not in control.

"There were 40 different militant groups operating within Pakistan. So Pakistan went through a period where people like us were worried about could we survive it. So while the US expected us to do more and help the US win the war, Pakistan at that time was fighting for its own existence," he said.

Khan said it was very important that he met President Donald Trump and other top American leaders.

"We have explained to them that the way forward is: number one, the relationship has to be based on mutual trust," he said, claiming that he would be honest in telling the US what Pakistan could do in the (Taliban) peace process.

Pakistan, Khan said, was trying its best to get the Taliban on the table to start this dialogue. "So far, we have done pretty well," he said and cautioned the US that the process was not going to be easy.

"Do not expect this to be easy, because it is a very complicated situation in Afghanistan. But rest assured, we would be trying our best. The whole country is standing behind me. The Pakistan Army, the security forces, all are behind me. We all have one objective and it is exactly the same objective as the US, which is to have a peaceful solution as quickly as possible in Afghanistan," Khan said.

In his last public engagement before winding up his three-day US visit, Imran Khan hoped that the US-Pak relationship was now at a different level.

"It was painful for us to watch the mistrust between the two countries," he rued, adding, "We hope that from now onwards, our relationship will be completely different."