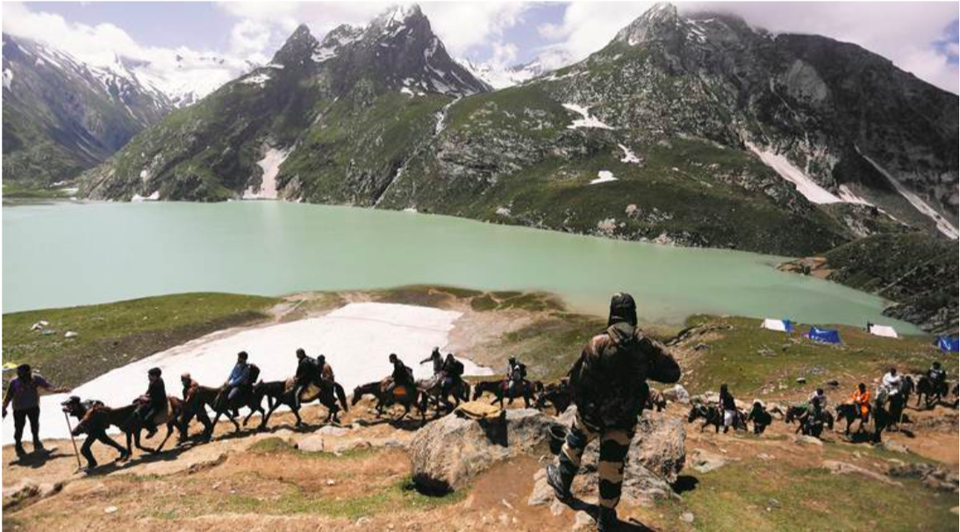 There are two trekking routes to the Amarnath shrine — the traditional Pahalgam route and the shorter Baltal trek, which is 14 km from the base camp at Baltal in Central Kashmir’s Ganderbal District.
Source: Indian Express

At an altitude of 14,500 feet and under several inches of snow, Mahagunus Top or Mg Pass looks serene, wrapped in a blanket of white. At 6 am, it’s deserted, except for a few men in blue-and-yellow jackets. Personnel of the Jammu & Kashmir Police’s Mountain Rescue Teams (MRTs), they are here to help pilgrims navigate the highest — and what’s considered the toughest — point along the route to the Amarnath shrine in Kashmir.

Every year, about 10 days before the start of the 46-day Amarnath pilgrimage, the MRTs, drawn from the State Disaster Response Force (SDRF), are deployed along the entire stretch of the yatra route, besides home guards and personnel from other agencies. Today, on Day 16 of the yatra, Zahoor Ahmad, 31, and Ishtiyaq Ahmad, 31, part of a 10-member MRT team that has been deployed at the Pass, have been here much before the first pilgrim of the day is scheduled to the spot.

Just then, Zahoor and Ishtiyaq spot a man wearing a raincoat trekking up, panting heavily. They sprint up to him and ask if he needs help. “Are you comfortable? Do you need any support?” Zahoor asks. The pilgrim, too tired to speak, leans against his walking stick and responds in a low voice: “I am fine. How far is it to the top?”

According to official figures, as of July 18, 2,32,860 yatris have visited the Amarnath cave, of whom 1,03,332 took the Baltal route, and 1,29,528 chose the longer Pahalgam route. From Mg Pass, pilgrims usually head to Pospathri and then to Panchtarni, where they halt for the night.

At MG Pass, where the temperature often drops below freezing point at night and which has very low levels of oxygen, the MRT’s job is crucial — they have to be prepared for medical emergencies and respond quickly in case any of the trekkers falls ill.

Other than the MRT team, personnel from the departments of health, tourism, forest and electricity, besides a few locals selling water and juice, have set up camps at Mg Pass. A unit of the Army too is deployed here.

It is now 7.30 am and more pilgrims make their way up. While some are on ponies, others are on foot. A young woman from Bengaluru, who is trekking with her mother, walks up to Zahoor and Ishtiyaq and asks: “Abhi agey aur upar kitna jana padega (How much longer will it take us to reach the top?) Will the trek ease up after this or will the climb be tougher from here on?”

Zahoor responds, “Zyada door nahi hai (It’s not too far). After you cross this pass, the route is not very steep.”

Just then, a 60-year-old sadhu, carrying a trident, complains of breathlessness. Ishtiyaq takes out a portable oxygen can from his bag and administers it to the sadhu. After a few minutes, the man smiles, places his palm on Ishtiyaq’s head and says, “May Bhole bless you. You are doing very good work.”

As more pilgrims reach Mg Pass, many more complain of breathing trouble and it’s Zahoor’s turn to administer oxygen. Ishtiyaq, meanwhile, is helping elderly pilgrims cross a particularly slippery stretch nearby. He, along with another MRT member, carry some of them up the slope.

At some distance are a group of tents, some of them covered in blue-and-yellow tarpaulin sheets. “That’s where we stay,” says Ishtiyaq, adding that these tents, which house six to seven personnel each, are not only for MRT members but also for those from other departments. Spotting a colleague clearing snow at the entrance of a tent, he says, “The MRT team reached on June 21; we were the first to arrive. The terrain is tough and it’s not easy to set up tents here. The snow base inside the tents starts melting because of the temperature inside and we have to relocate every few days.”

Ishtiyaq, a constable with SDRF, says this is his first deputation on Mg Pass. A graduate, he joined the SDRF in 2012 and is now posted in Srinagar. 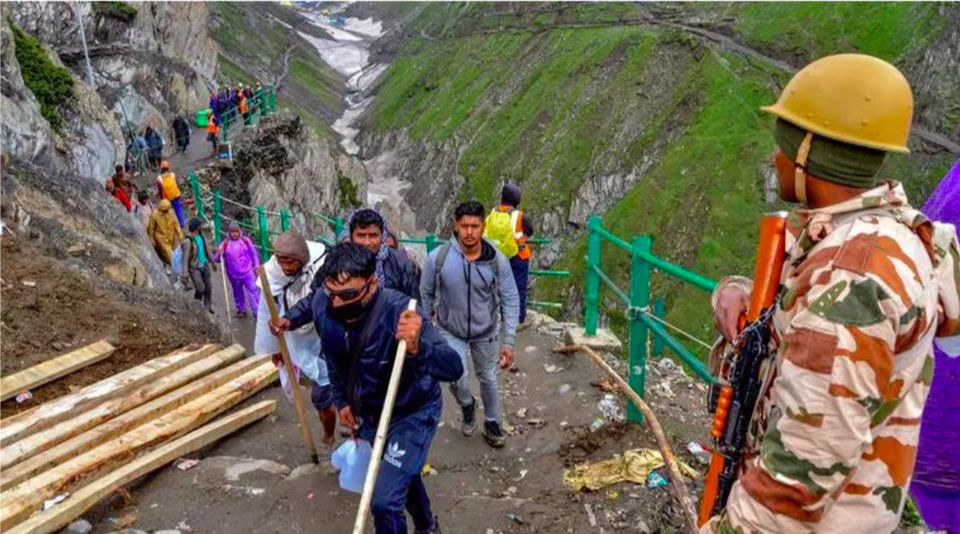 This year, authorities increased the number of MRT units (each unit has about 10 members) on the yatra route. Pic credit: PTI

Before every such posting, MRT members have to do several courses, including one on rescue operations. “I know Cardiopulmonary Resuscitation (CPR) and other first-aid techniques… I have also done a course in swimming and skiing,” he says.

This year, authorities increased the number of MRT units (each unit has about 10 members) on the yatra route. “There are 31 MRTs in all along both the Baltal and Pahalgam routes, right up to the holy cave. In 2018, there were only 25 teams,” says Tariq Ahmad, an SDRF officer, who is in charge of MRT teams on the Pahalgam route.

A little before noon, one of the pilgrims approaches Zahoor, saying she slipped on her way up and hurt her leg. Zahoor gives her a pain-relief balm and the woman thanks him profusely. “Dekho, bhagwaan ne kaise bheja aap logon ko (You are a godsend),” she says.

Just as the woman leaves, another pilgrim, a man in his 40s from Pune, asks Zahoor: “Where can I make a call? One of my friends is on a pony on the way to the cave. I haven’t been able to contact him — there is no network on my phone.”

Zahoor tells him he will have to travel some distance to make calls as the area has poor cellphone connectivity.

He says he himself hasn’t called home in a while. “Even in the evenings, we can’t venture too far to make calls because there are snow bears roaming around. It’s not safe… One night, we received a wireless message from the SSP office, saying the family members of a home guard personnel were worried because he hadn’t called them. We informed the SSP office that he was fine and that he would soon get in touch. But when this man ventured to a nearby area to make the call, he spotted snow bears. He immediately returned. He managed to call his family only the following day.”

Zahoor, who has Bachelor’s degree in Education, joined the SDRF in 2012. Originally from Baramulla, he is posted in Srinagar.

The pilgrim from Pune now wants a selfie with Zahoor, who obliges cheerily.

Around 1 pm, he is back at the camp for lunch. “There is rice and dal,” says a colleague. “We cook ourselves. If one of us gets to go home, we fetch some vegetables. Otherwise, we make do with what we have, mostly rice and dal,” Zahoor says, heating the food that was cooked in the morning and has turned icy cold by noon. 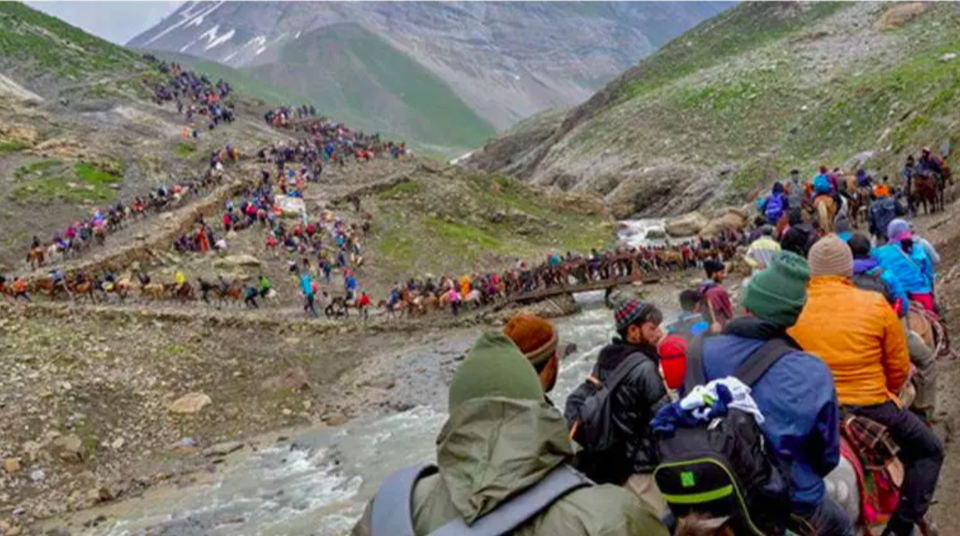 A few MRT members enter Zahoor’s tent to chat. “The water from the glaciers is so cold that we can’t even touch it. So we didn’t bathe for the first 15 days after we were sent here. But then, the Health Department sent a gas geyser for their men and now we too use it,” says one of them.

It’s 3.30 pm and Ishtiyaq and Zahoor are back at the Pass. The weather has taken a turn for the worse, with a strong gush of wind accompanied by rains and, soon after, a hailstorm. Ishtiyaq, Zahoor and other personnel direct pilgrims to a fibre-glass shelter, which was set up ahead of the yatra season. “The weather here changes in no time — bright sun one minute and heavy rain the next,” says Zahoor.

With the rain still pounding, one of the pilgrims comes out of the shed to tell Ishtiyaq that a sadhu is complaining of pain. Ishtiyaq and a health official deployed at the Pass head to the shelter. “I can’t breathe,” the sadhu says, panting heavily. The health official helps the man with a nebuliser and tells Ishtiyaq to call two men who can take him to the doctor at the health camp on Mg Pass.

It’s now evening and the pilgrim flow has thinned. According to the CRPF, over 7,500 people have taken the Pahalgam route since the beginning of the day. MRT officer Mohammad Ashraf tells his team to spread out and ensure no pilgrim is stranded anywhere on the trek. At 7.30 pm, against the setting sun, a camp fire is lit up outside the tents.

After a few minutes by the fire, the men start returning to their tents. The team can finally call it a day — unless there is an emergency. Around 8 pm, the wireless sets cackle with a message: a MRT team from a nearby camp is taking an ill pilgrim down to the base camp.