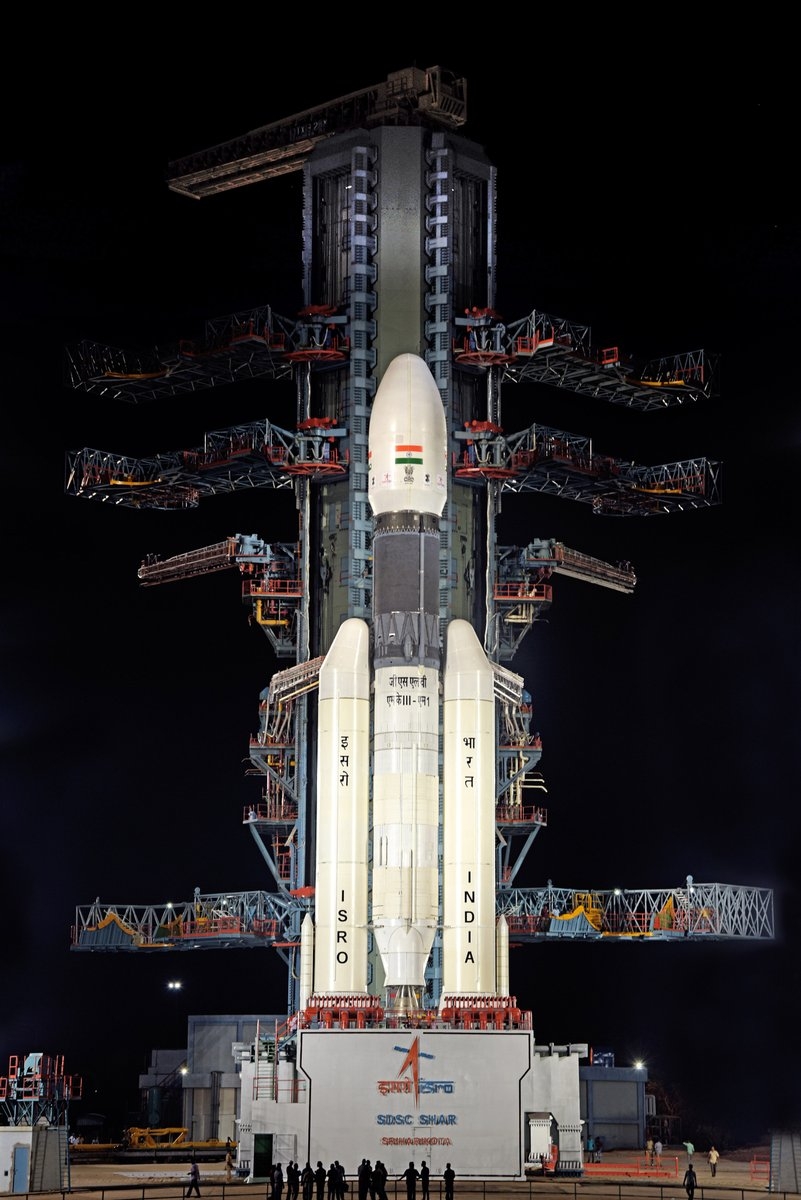 SRIHARIKOTA: India’s ambitious second mission to the Moon had to be put on hold due to a 'technical snag' barely an hour before its scheduled launch early Monday morning.

The Indian Space Research Organisation (ISRO) had scheduled its dream moon mission launch of Chandrayaan 2 at 2.51 am, from the Satish Dhawan Space Centre in Sriharikota, Andhra Pradesh. But the countdown was stopped 56 minutes and 24 seconds before lift off at 1.55 am. ISRO’S Mission Control Centre announced the decision even as the space agency tweeted saying the Chandrayaan 2 launch was called off “as a measure of abundant precaution” after a “technical snag was observed in launch vehicle system”. ISRO, however, has said that the revised launch date would be announced later.

Chandrayaan-2 is an ambitious mission that aims to place a rover on the Moon. A GSLV MK-III rocket is scheduled carry Chandrayaan-2 to the Moon and place into orbit an orbiter that will revolve around the satellite for around a year.

There was tremendous excitement and atmosphere of expectation as over 5000 people had gathered to witness the historical moment of the launch. However, all was not well behind the scenes because checks of the rocket system uncovered a problem and ISRO officials decided to abort the launch.

ISRO officials later said the problem was with the critical cryogenic stage. Reacting swiftly, they ensured that the rocket and satellite were safe, and that the highly flammable liquid hydrogen and liquid oxygen were removed from the rocket.

A technical snag was observed in the launch vehicle system at t-minus 56 minutes, ISRO Associate Director (Public Relations), B R Guruprasad was quoted as saying by PTI. President Ram Nath Kovind was at Satish Dhawan Space Centre in Sriharikota to witness the launch. According to reports, Chandrayaan 2 launch was earlier scheduled in the first week of January. However, the date was later shifted to July 15.

The rocket functioning was not according to laid down parameters... we are extremely lucky to detect the anomaly just before the launch, we are in control, the rocket and satellite are safe,” the Hindustan Times reported, quoting a source.

A committee of experts will now examine what went wrong and suggest ways to remove the glitches. “We will have to dismantle the rocket to get to the root of the problem… we have window till month end to launch the mission,” the source added.

There were four suitable window periods for the launch in the month of July – July 15 and 16 and then again during new moon on July 29 and 30, the HT report said.

Chandrayaan-2 is ISRO's dream moon mission. After its successful completion, India will join an elite club of countries to send a rover to the Lunar surface. India would become the first country to do it so on Lunar South Pole which is one the darker side of the Mon and where there has been some possibility of finding water. Chandrayaan 2 is quite inexpensive compared to the missions of other countries. The total cost of Chandrayaan 2 is Rs 978 crore which includes Rs 603 crore as mission cost and Rs 375 crore as its launch cost. According to estimates, it is way cheaper than Hollywood movies like Avengers: Endgame and Avatar.

The 640-tonne GSLV MK-III is ISRO's most powerful launcher, also known as "Bahubali". 973.7 seconds after lift-off from Sriharikota, Chandryaan-2, carrying lander-Vikram and rover-Pragyaan, will separate from the rocket and head to the south pole of the Moon.

In the first week of September, the orbiter was scheduled to release a lander that would have landed near the lunar south pole. The lander would then have released a rover to move around on the lunar surface and carry out missions.

At 9.30 p.m. on Sunday ISRO tweeted: Filling of Liquid oxygen in cryogenic stage of #GSLVMkIII-M1 Commenced.

At 10.30 pm it tweeted: We are less than five hours from the historic launch of #Chandrayaan2. Meanwhile observe people being dwarfed by the 14 storey high #GSLVMkIII-M1 vehicle.

However, even earlier ISRO chief K Sivan had set a guarded tone and said that the time for celebration hasn't come yet. "The 15-minute final descent will be our most terrifying moments because we have never undertaken such a complex mission," he had said.

HIGHLIGHTS OF THE POSTPONED  MISSION

JOURNEY TO MOON: Chandrayaan-2 is a 3.8-tonne satellite. After its lift-off from Sriharikota, the Chandrayaan 2 will orbit the Earth several times before being slung towards the moon. The 3.84 lakh-km journey, undertaken primarily to check if the lunar south pole has primordial water reserves, will take nearly two months.

MADE IN INDIA: All the equipment involved in the Chandrayaan 2 mission -- from its orbiter to lander and rover -- has been designed and manufactured in India. It is the sequel to the successful Chandrayaan 1, which helped confirm the presence of water on the moon in 2009.

COST EFFECTIVE: An analysis published by Sputnik International claimed that the approximate $124-million price tag of the Chandrayaan 2 is less than half the budget of Hollywood blockbuster Avengers Endgame ($356 million). The Indian space agency has a budget that's 20 times less than NASA, its US counterpart.

MILESTONE: If India succeeds in this moon mission, it will become the fourth country to soft-land a spacecraft on the lunar surface after the US, Russia and China. Israel had tried earlier this year but failed.

WOMAN POWER: The project director and the mission director of the Chandrayaan 2 are both women.

THE LANDING: Chandrayaan 2 will carry Vikram, a 1.4-tonne lander, which will in turn set the 27-kg rover Pragyan down on a high plain between two craters on the lunar south pole. Chandrayaan 2 will separate from the rocket 973.7 seconds after its launch. After touchdown on the moon, the rover is expected to conduct experiments for 14 Earth days.

ROAD AHEAD: India's next big mission will be to send a human into orbit through Gaganyaan by 2022.