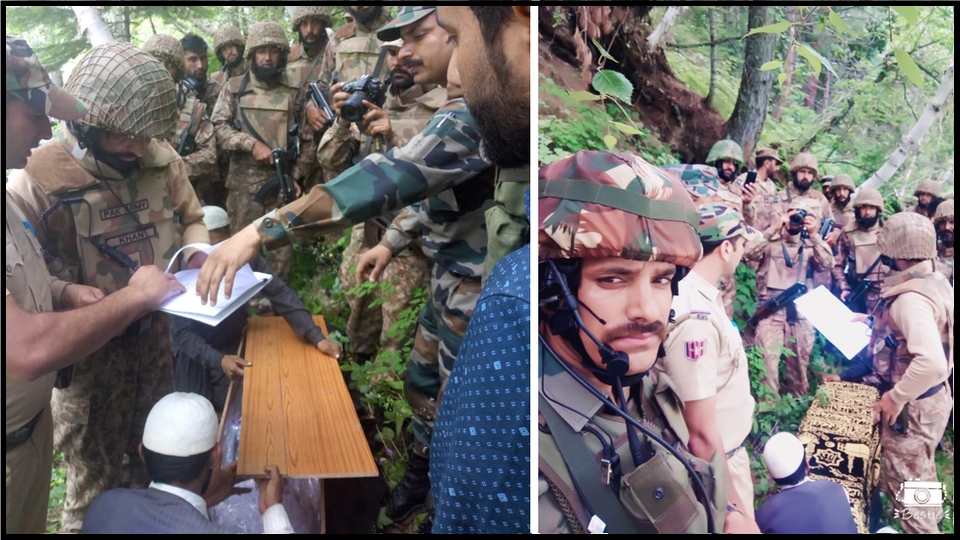 SRINAGAR: The Indian Army broke protocol on humanitarian grounds to hand over the body of a child, belonging to Pakistan-occupied area of J&K, to Pakistan Army today. The boy had fallen into a river and his body drifted into Gurez valley, in the Kashmir region. After much ado from Pakistan’s side, the body was finally handed over on Thursday afternoon.

The body of seven-year-old boy Abid Sheikh from Pakistan-occupied Jammu Kashmir (PoJK) was found four kilometres inside Kashmir in River Kishenganga in Gurez. The Indian Army had retrieved the child’s body on Tuesday.

The boy’s family learnt of his death after the picture of his body went viral on the social media in Jammu and Kashmir. “My only appeal to people of India is to help in returning the body of my son. I will be indebted. Our Army chief should also play a positive role,” Nazir Sheikh, the boy’s father, said in a video. Social media users were moved by the video, which was shared many times accompanied by emotional comments.

“The two Armies (India and Pakistan) established contact (on Tuesday) after a video was uploaded by the family living in (PoJK’s) Minimarg across the river. The boy was identified but the location for exchange kept changing on Wednesday,” Shahbaz Ahmed Mirza, Deputy Commissioner, Bandipora, told The Hindu.

The family of Abid Sheikh said in the video that the boy had left for school on July 8 but did not return home. They suspect he fell off the cliff into the river and was washed four km across the LoC in J&K's Gurez valley.

Late evening media reports on Wednesday confirmed that the body remained in India till 7 p.m. on Wednesday as the Pakistan Army insisted on receiving the body in Kupwara’s Teetwal area, over 150 km away from Gurez. Locals said the Teetwal route would have taken at least two days for the body to reach the victim's place in PoJK’s Gilgit-Baltistan area, as the distance is of more than 800 km.

Pakistan Army mentioned hidden landmines on the LoC in Gurez as a reason not to exchange the body and suggested Teetwal instead. However, Pakistan later agreed for a spot in Churwan in Gurez. The body was first taken towards Kupwara and then driven back to Gurez.

“We are pursuing the exchange. We are in the process to identify the final spot to hand over the body,” said Senior Superintendent of Police (SSP), Bandipora, Rahul Malik late Wednesday evening.

The delay in handing over the body spurred an online campaign for immediate action. “Being a native of Astore in Gilgit-baltistan, it is with a heavy heart that I appeal to the concerned authorities to look into the case of the drowned little angel from Astore, whose body was found in Gurez. I hope the body can eventually be repatriated on humanitarian grounds,” tweeted Asma Khan Lone, wife of Peoples Conference chief Sajad Lone.

Finally, the body was successfully handed over to Pakistan Army on Thursday afternoon.