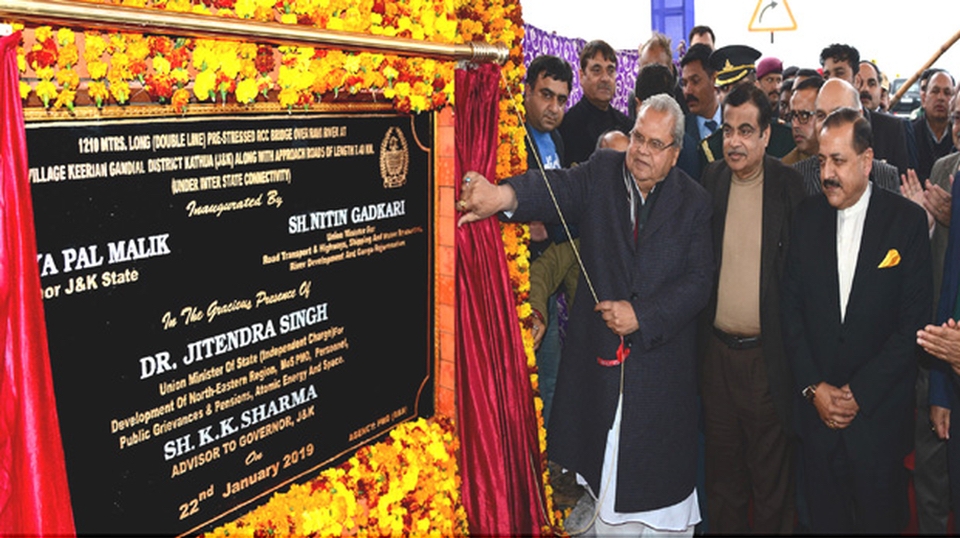 JAMMU: Union Minister Nitin Gadkari along with Union Minister Dr Jitendra Singh and Governor Satyapal Malik on Tuesday inaugurated a bridge over the Ravi river in Jammu & Kashmir. The bridge has effectively reduced the distance between Kathua in Jammu and Pathankot in Punjab from 45 km to 8.6 km.

The landmark bridge at Keerian-Gandial will benefit over 2.2 lakh people living on both sides, linking the secluded areas of Kathua district with the state of Punjab.

The 1.2 km long inter-state bridge has been constructed at a cost of Rs 158.84 crore in a span of three and a half years, the Road Transport and Highways Ministry said in a statement.

Kathua’s southern border is bound by Punjab and Himachal Pradesh. The bridge is expected to boost the social as well as economical development of the people. The bridge will also reduce traffic on the Jammu-Kathua-Pathankot National Highway. Easing out traffic on the national highway will help in decongesting the area, hence making it easy for commuters to travel from one place to another, through the highway.

While dedicating the bridge to the Nation, Gadkari said that Prime Minister Narendra Modi-led government had set a new mark in timely delivery of public goods by completing various projects on or before time.

The Minister also gave full credit to Union Minister, Dr Jitendra Singh with whose efforts, he said the bridge was constructed. “I too was forced to take personnel interest in getting it sanctioned”, he added.

Giving details about the ongoing highways projects in Jammu & Kashmir, Gadkari said that the NH network in the state has seen an increase of 969 km in the last four years.