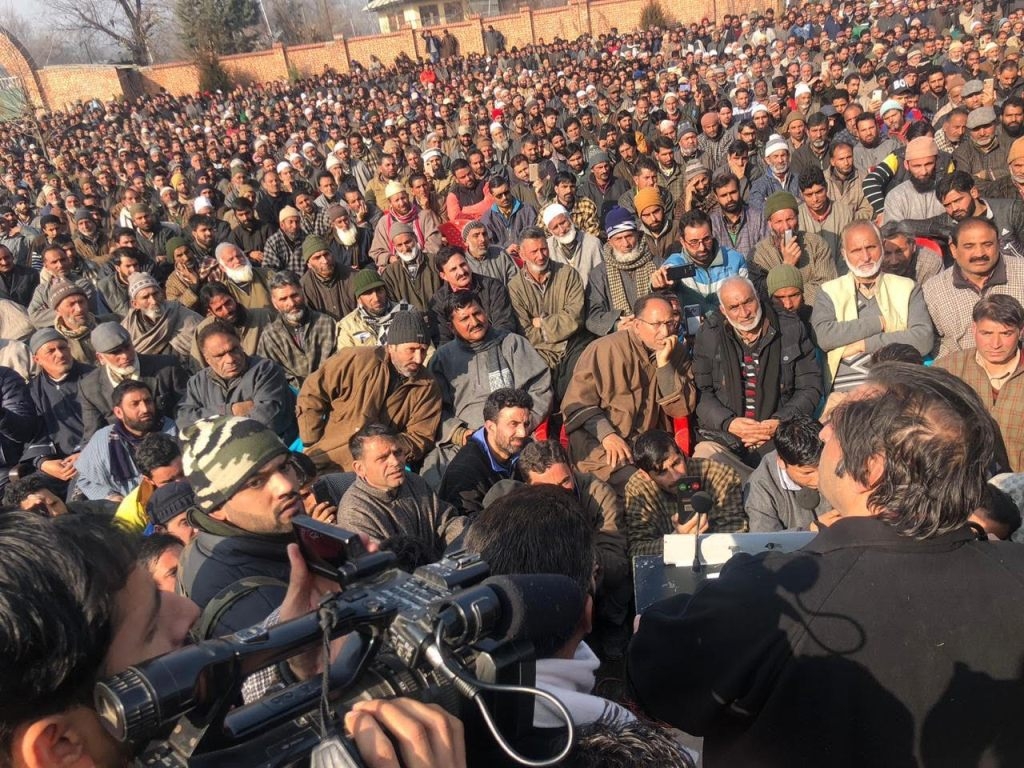 People's Conference chairman Sajjad Gani Lone addressing a workers' convention at Handwara on 25 December, attended by dozens of elected Panchs and Sarpanchs from the region.
JAMMU: BJP ally Sajjad Gani Lone's Peoples Conference is fast emerging as a strong third front and a force to reckon with in Jammu and Kashmir politics.

The Peoples Conference (PC) has started making successful political inroads outside the Kashmir valley as well.

Two senior leaders - former MLA Kargil and ex-PDP spokesman – joined the party on Sunday. Muhammad Baqir Rizvi, who was elected as MLA from Kargil in 2014 and who had supported the then PDP-BJP coalition government, joined PC in Jammu along with former PDP spokesman Abhijeet Jasrotia. Both Rizvi and Jasrotia were welcomed into the party by PC chairman Sajjad Gani Lone, a separatist-turned-mainstream politician.

The PC with the tacit support of BJP emerged as a viable Third Front in Kashmir after half a dozen dissident PDP leaders including an ex-minister and two ex-MLAs and former National Conference spokesman joined the party.

This is the first instance of Sajjad extending his reach beyond Kashmir, into Ladakh and Jammu regions.

Senior PC leader and former PDP minister Imran Reza Ansari said people, who are joining them, are taking conscious decision. "Everybody wants to be a partner in change. We are promising the change."

Media reports suggest that more disgruntled leaders of PDP, NC and Congress are in contact with Lone and could join his party in coming days.

However, Sajjad Lone is yet to strengthen his base properly within Kashmir region itself. It is said the influence of Sajjad's party is restricted to north Kashmir and some pockets in central Kashmir including Srinagar.

Sajjad, whose brother is an executive member of separatist Hurriyat Conference led by Mirwaiz Umar Farooq, is an ally of the BJP.

He has emerged as a key player for BJP in Kashmir and for this reason despite his party having only two members in 87-member J&K Assembly, he was allocated a ministry from BJP quota during three years of PDP-BJP coalition government in the State from March 1 2015 to June 19, 2018.

Sajjad had forged an alliance with BJP before the 2014 State Assembly polls after meeting Prime Minister Narendra Modi.