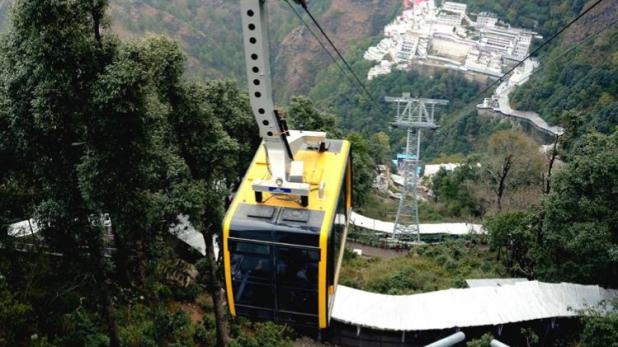 Pilgrims heading to Mata Vaishno Devi shrine in Jammu and Kashmir will now be able to pay obeisance at Bhairon Nath mandir with greater ease. A high-tech ropeway between the Bhawan and Bhairon mandir was inaugurated on Monday (24 December).

According to some beliefs, the pilgrimage to Vaishno Devi mandir is complete only after final prayers are offered at the Bhairon mandir. However, since the climb to Bhairon, situated just 1.5 kilometres from the Bhawan, is extremely steep, it was difficult for many pilgrims to visit the temple. It was particularly tough for the elderly and specially-abled pilgrims. As per some reports, only 30-40 per cent of the pilgrims who visit the Vaishno Devi head towards the Bhairon Nath temple.

However, with the launch of Bhawan-Bhairon ropeway project, passengers can reach the temple in just five minutes. A ride on the ropeway will cost Rs 100 per person. "The Board has decided to charge a highly subsidised to and fro ticket of Rs 100 per passenger to enable the maximum number of pilgrims to avail of this facility," a press statement said.

Trial runs were conducted on Sunday. Governor Satya Pal Malik, who is also the chairman of the Mata Vaishno Devi Shrine Board, inaugurated the ropeway on Monday. Media reports suggest that the temple witnessed over 3000 more people than the average footfall it usually receives.

The Ropeway Project has a carrying capacity of 800 persons per hour.

The work for this ropeway started in 2013. It took four years and approximately Rs 85 crore to complete the project. Under the supervision of RITES, the project work had been undertaken by the joint venture of Garaventa AG, Switzerland and Damodar Ropeways Construction Co (P) Ltd, Kolkata. The electromechanical components and cabins of the ropeway have been imported from Switzerland. The Passenger Ropeway System has been fully equipped with all safety norms as per relevant standards and code

The Vaishno Devi cave shrine is situated in a cave on Trikuta hill at an altitude of 5200 ft. The pilgrims undertake the holy trek from the base camp at Katra situated some 12 km from the cave. The main deity in the cave is in the form of three natural rock formations called the Pindis. Unlike other shrines, there are no idols or statues inside the holy cave.

The Bhairon Nath mandir is reportedly situated at 6600 ft.