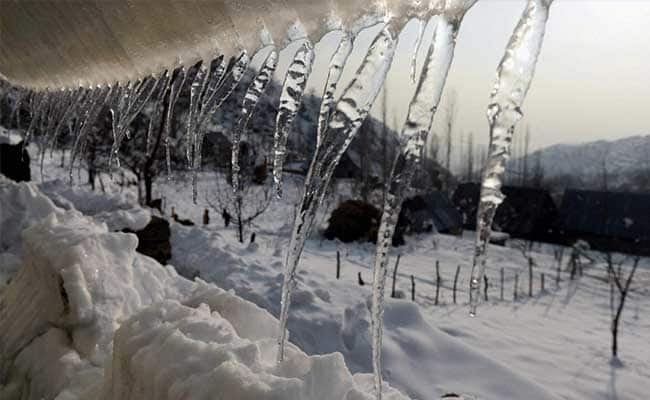 The cold wave has resulted in freezing of some water bodies, including the fringes of the famous Dal Lake in Srinagar and water pipelines in Srinagar and other towns of the Valley.

Kargil recorded a low of minus 14.4C, Qazigund, the gateway town to Kashmir, recorded minus 5.9 degrees Celsius while Gulmarg, Kashmir's famous ski resort, was the coldest place in the Valley at minus 9.4 degrees Celsius, a Met department official said.

Drass in Kargil was the coldest place in Jammu and Kashmir at minus 19.5 degrees Celsius.

Undeterred by the cold wave, though, more than 5,000 tourists are expected to arrive at Gulmarg for the New Year celebrations, where a grand celebration has been planned, which includes musical concerts, gala dinners, night skiing, snowboarding, bonfire etc. This beautiful ski resort currently is under a carpet of snow.

“Over 8.5 lakh tourists have visited the Valley this year and the hotel occupancy at Gulmarg is almost 100 per cent for New Year. We want to tell the world that Kashmir continues to be as beautiful as it was,” Adviser to Governor Khurshid Ganai told reporters on the sidelines of a function held on Christmas at Nehru Park, Dal Lake.

He added, “I am happy to hear from leading tour operators, hoteliers and houseboat owners that lots of bookings have been made. This is fantastic news and encouraging. For the past few months, the number of tourists visiting the Valley has been encouraging. This is outcome of the untiring promotional activities carried out by the department. Tour operators also worked very hard to convince travellers to visit Kashmir.”

The New Year celebrations at Gulmarg come after two years of turmoil. Celebrations are aimed at instilling confidence among tourists.

"We will be having a function at the Gulmarg Golf club and are also planning night skiing under lights but that depends on the level of snow. Also, there will be cultural programmes - it will be a four-hour event, from 8 pm to midnight," Nasir Khan, assistant director, Tourism department, Gulmarg, was quoted as saying in a media report.

Kashmir is currently under the grip of 'Chillai-Kalan' the harshest period of winter when chances of snowfall are maximum and the temperature drops considerably.'Chillai-Kalan' ends on January 31, but the cold wave continues even after that in Kashmir. The 40-day period is followed by a 20-day 'Chillai-Khurd' (small cold) and a 10-day 'Chillai-Bachha' (baby cold).

However, the winter this season has been dry so far, although there was a spell of early snowfall in the Valley in first and second week of November.

The prolonged dry spell has resulted in an increase in common ailments like cough, cold and other respiratory problems, especially among children and elderly.

The weatherman has predicted rain or snowfall at isolated places in the Valley and Ladakh region on Wednesday while most areas will have dry weather till the New Year eve.

Enthused by this, the Jammu and Kashmir government has decided to pump huge amounts of money for development of tourism infrastructure in the state.

"There will be Rs 130 crore for tourism promotion in addition to Rs 2,000 crore under Prime Minister’s Development Package for infrastructure upgradation," said an official spokesman.