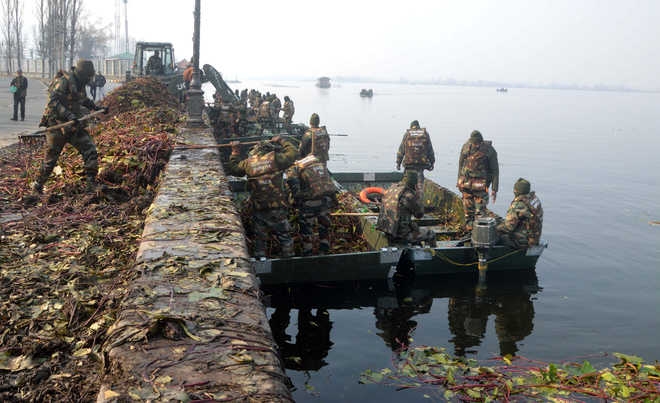 SRINAGAR: The Indian Army has taken up a new and unique mission. On target this time is not the terrorist but the terribly polluted Dal Lake in Kashmir valley.

The world famous Dal, which attracts lakhs of tourists every year, is in a sorry state – a silent victim of increasing habitation, lack of waste management, massive sewerage flow and corrupt governance. Over 700 crore rupees have been spent to clean up the Dal Lake since 2002, but nothing much has happened on the ground and the health of the water body continues to deteriorate.

The Srinagar Municipal Corporation (SMC) has teamed up with the Army, Lakes and Waterways Development Authority (LAWDA) and the general public for an extensive Dal cleanliness drive.

The Army’s decision to chip in to help reinstate the pristine glory of the water body is interesting in itself!

In the initial phase, the joint teams are trying to figure out how to restore the health of the lake.

“At the moment some initial reconnaissance is being done to see what could be done so that enormity of the task could be tackled. The team is doing a pilot project to know what can be the best solution if we can contribute to the conservation of lake”, said an army spokesman at Srinagar.

Around eight to ten boats with troops have been pressed into service to clean the Dal presently. Cruising through the lake, the troops are helping in the de-weeding process to clean the waters.

On behalf of the SMC, the drive is headed by Deputy Mayor, Shaikh Imran and would continue for 21 days.

In a statement SMC spokesperson said at least 80 Army boats and 300 shikaras of Dal along with SMC men and machinery were in full swing to conduct the cleaning operation.

"Clean Dal Lake is a priority for all of us. I am thankful to the army for volunteering with lake authorities and Dal dwellers on my request and intervention of LAWDA head,” the Deputy Mayor said.

"We need to sensitize all stakeholders for cleaning the lake and keeping it clean too. Everyone must contribute to save Dal Lake," he said.

The State Administration had approached the Army and requested to extend a helping hand in this mission, to which the Army responded positively and undertook the pilot project.

A joint task force of Army, LAWDA and SMC is presently working towards this mission and is currently sharing the technical expertise and infrastructure available with them for the same.

Shaikh Imran, Deputy Mayor, Srinagar, along with a delegation of 150 people including SMC officials, Corporators, Social Workers, LAWDA Workers and Shikara Dwellers, visited SKICC and applauded the progress achieved by the joint team in cleaning the Dal Lake, according to a statement issued here.

The SMC spokesperson said that conveying his satisfaction on the quantum of work done, the Deputy Mayor enquired about the requirement of additional funds and equipment for furthering this project. “He also expressed his gratitude to the Chinar Corps for their prompt response in joining hands with the civil administration on such a large scale despite their heavy operational commitments,” he added.

The Army spokesperson said that as a pilot project, this joint task force is working towards improving the present speed of deweeding, assessing the quantum and types of equipment and machines required for deweeding besides ascertaining the strategy to contain the contributing factors of weeding in the Dal Lake.